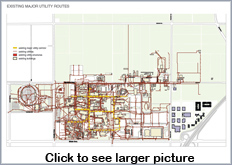 The systems of wet and dry utilities have been built incrementally as the campus has grown. Some lines have been replaced, leaving the old pipes or cables in place. It is important to distinguish active from inactive lines so that the siting of new buildings, plantings and other facilities are not unnecessarily restricted, or conversely, that important utilities are not disturbed.

The siting of new buildings identified in the Campus Utilities Master Plan prepared in 2005 will in some instances require further extension of those systems. Most major utility lines on campus are buried beneath driveways and footpaths so that they can be accessed for maintenance. This pattern will continue. In some instances it may be necessary to reroute one or more lines to free a site for construction, but these are unlikely to involve major utility feeders.

The Campus Utilities Master Plan projected Central Plant capacity needs and expansions to the existing utility systems based on anticipated building improvements for the next eight years. The basis for increases in demand and the routing of new services was based on the 2005 update of the 1963 campus master plan, and a list of ten specific building improvements. Other improvements through 2025 were referenced only indirectly.