All buildings on campus were evaluated with the assistance of Facilities staff familiar with the fabric and functions of each. In most cases, the master plan team had already seen the buildings and discussed the fit between building and program with faculty members. The task at hand was to understand the potential usefulness of each building to the university ten, twenty years or more into the future.

Through this process, each building was listed in one of five categories:

A useful way to understand where and how much change can occur in different parts of the campus is to combine surface parking lots with buildings that are to be cleared with adjacent developable lands. Surface parking lots, roads and pathways not burdened with major utilities, and fragments of underused land can be consolidated into areas suitable for comprehensive redesign. By regarding the design of such areas holistically, every aspect of the master plan can be addressed, combining built facilities with supporting landscape and circulation improvements.

It is important that construction budgets be developed to include not only demolition and construction on the immediate site of new buildings, but also the landscape, circulation and infrastructure improvements necessary to the project's full integration into the campus systems. This should also include improvements to the lighting and way-finding systems. Only by improving a sector of the campus at a time will the intent of the master plan be realized.

As parking is removed to multistory garages, access will continue via the same routes used today to reach parking lots. However, the spread of traffic between entrances will be more uniform, and conflicts with pedestrians will decrease significantly: notably on Barstow near Cedar, where most parking on lot Q will be transferred to a garage on Lot K.

The number of parking spaces to be provided on campus as enrollment increases will depend on how many staff and students can be persuaded to travel to and from campus other than by driving alone. A study of how many students live within walking or bicycling distance of the campus (overleaf) gives an indication of that potential: over 2,500 live within 1.5 miles of the campus and account for about 900 parking spaces on campus. If half of those who currently drive alone to campus could be persuaded to walk, bike, carpool or use transit, the university would save about $5.4 million in projected construction costs for structured parking. 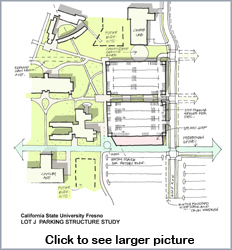 In the past, there was a strong bicycling tradition among faculty, staff and students. In order to restore this possibility, substantial improvements must be made to the safety and convenience of negotiating streets and intersections off-campus.

Large numbers of students live within walking and bicycling distance of the campus. Many more could be persuaded to use those modes rather than driving if there were safe and congenial routes for them to use. Many more would use transit if it could be made more convenient and affordable. Programs to encourage students, faculty and staff to get to and from campus by some means other than driving alone are a priority. The costs of such programs can be off-set by savings in reduced numbers of parking spaces to be constructed on campus. A secondary benefit would be reduction of congestion during peak arrival and departure times at the campus.

In order to understand the pace at which additional facilities will be needed, projections of full time equivalent (FTE) student counts over the next ten years have been matched to the gross area of facilities needed to accommodate them. The average floor area allocated to each student tends to increase over time as the incidence of specialized spaces such as research labs increases.

The broad conclusions from this study are that today's 2.6 million gross square feet (GSF) will need to increase to 4 million over the next ten years, and to 5.5 million in twenty years time. The gross areas suggest the extent of the 10-year development program detailed in the following section. On average, 155,000 GSF of new space will be needed each year in addition to replacement of any demolished spaces. As the boundaries of the academic campus will not increase significantly, the density of development will necessarily increase from an average 0.16 Floor Area Ration (FAR) in 2006 to 0.25 FAR in ten years and to 0.35 FAR in 20 years. Floor Area Ratio is the ratio of built floor space to site area. In order to sustain the rich series of landscaped open spaces that characterize the campus, it will be necessary to build taller buildings as density increases. Additional pressure on campus facilities is the need for new buildings to accommodate activities displaced form demolished category 5 buildings that have outlived their usefulness.

In addition to increased facilities needs, parking demand will also increase year by year with enrollment. If no progress is made in increasing the proportion of people who get to and from campus by walking, bicycling, transit or carpooling, then over 1,250 parking spaces will have to be added in ten years, and over 2,000 in twenty years. Congestion increases will accompany these parking additions. If, on the other hand, the current rate of demand of one parking space for every 2.3 FTE students could be reduced by 16% over the next ten years, there would be no net increase in parking demand. Assuming that the additional 1250 parking spaces would be in parking garages, the savings in construction costs would be in the order of $10 million.