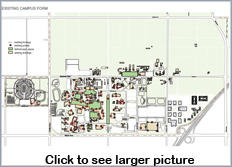 Entrances to buildings throughout the campus mark the origins and destination points of walking trips, and collectively define the shape and extent of the pedestrian circulation system. Main entrances generally indicate the front of a building; an orientation relating to the perceived form of the campus when the building was designed. Among the entrances to all existing buildings on campus, it is difficult to recognize any clear pattern. One of the purposes of the campus Master Plan is to bring order to the campus, making it easier for people to find their way from one place to another. This will be achieved through a number of coordinated measures, including the siting and orientation of new and replacement buildings, changes in landscape design, clarification in the hierarchy of walking and vehicular routes, and upgrading signage and lighting.

The orientation of major buildings on campus which are expected to endure for generations establish the basic patterns of campus form. Landscape design and circulation routes will conform to that orientation, as will the siting and orientation of new facilities. As buildings are replaced, supplemented or remodeled, the orientation of each will acknowledge the established patterns set by existing buildings, landscape and street alignments.

The open farmland and orchards that prevailed when the campus was first established have been slowly transformed as the campus has grown. The transformation has been through displacement by building, roads, and parking lots, and by replacement with lawns and rows of trees shading driveways, walkways and parking lots.

Collectively, buildings, roads and trees have defined the overall form of the campus. An analysis of the building inventory (later in this document) has identified those buildings and associated areas where change will occur. Each new building with the landscape around it will redefine a part of the campus. The master plan seeks to coordinate these interventions in a way that the overall structure and activity patterns of the future campus are supported by the circulation patterns, vistas and spatial definition of the open space.

One of the objectives of the master plan is to modify the microclimates of the campus to make open spaces habitable and comfortable year-round. A significant component of this is to reduce heat absorption and retention by buildings and paved areas, known as heat island effect. The judicious use of trees near buildings and across paved areas is the most effective means of achieving this reduction. These plantings will be part of the fabric of open spaces that enfold the campus and contribute much to its quality, character and identity.